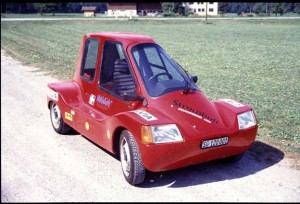 As the name shows, Stromboli II is not the first electric vehicle coming forth from it’s initiators. The prototype of its predecessor Stromboli I, was designed and built in 1989 by Markus Eisenring and is still in running condition, but has been taken out of service end of 2010. It is for sale and can be reactivated by an enthusiast within a short time.

Out of the endeavour to remodel it for series production and to redesign it along the lines of the latest developments came the Stromboli II project.

Stromboli I, which has covered over 100’000 KM since its existence, evolved from the racing solar mobile Helios. In 1984 Markus Eisenring, who eventually also was team leader, started the construction of a racing solar-mobile; between 1985 and 1987 three different racing models were built. Between 1986 and 1990 the Helios team won the vice world championship five times in succession.

The know-how gained here and gathered through the exchange with other designers of electric vehicles, was used for the design of the electric vehicle Stromboli I, which Markus Eisenring has been using daily since 1989. Not only has it proven itself by winning many races and the world cup of 1990 but particularly in every-day road traffic. Although it runs on conventional lead batteries, it achieves remarkable road performance since it was specially designed as an electric vehicle using lead batteries. This is manifested by a range of up to 150 km, the lifetime of the batteries which, with 250 cycles, can be charged three to four times more often than with electric vehicle available on the market, but also by the possibility to drive Stromboli I on the motorway without becoming a traffic hindrance.

The small overall dimensions make this two-seater vehicle extremely nimble. The seats are arranged behind each other and the batteries are stowed into cases along the sides between the front and rear wheels which effects in the centre of gravity being located at a very low level. The components are ideally matched to the concept: the low weight and the aerodynamic design minimise the energy consumption as much as the matching of the battery size to the weight of the vehicle and in turn the dimensions of the drive unit to the batteries. Furthermore, energy is recuperated when braking. Moreover, every component, where possible, has been assigned several functions. For example the battery stowage encasements, form a stress-bearing element, so that the bodywork is built as a monocoque construction.

Also in Stromboli I safety was a deciding aspect. So, in the event of an accident, the sandwich construction and the sustainers covering the entire length, can absorb the impact of external forces. The battery compartments act as a girder against lateral collision and the passengers are protected by the arrangement of the batteries. The low point of gravity offers much safety against overturning.

At the same time, Stromboli I is extremely easy to drive and operate because, there is no starting of the motor nor gear shifting. The reverse speed, cruise control, and a special ecomat which limits the energy supply, are controlled simply by pressing buttons. The on-board battery charger allows charging up the batteries from any 220/230 V outlet. However, Markus Eisenring obtains the necessary power from a solar panel on the roof of his house. So, in end effect, Stromboli I is a real solar-powered car. The installed battery heating, the four wheels and the possibility of mounting snow tires make Stromboli I also suitable for driving in winter.