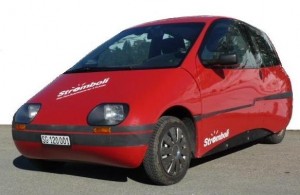 Setting new standards – that is the aim of Stromboli II. This concerns not exclusively the efficiency of the electric vehicle Stromboli II, but also safety, model design, equipment and driving quality. In one word: Stromboli II is up to the standards of usage of conventional vehicles. Stromboli’s designers came to the conclusion that modern electric vehicles should nowadays be able to compete with conventional cars and must no longer act as a low-pollution second or third car.

Stromboli II is a four-wheeled 2+2-seater car and is an answer to the problems commonly inherent with electric vehicles. Driving  this electric vehicle is a fully new, thrilling experience, even today, many years after it’s conception. In the first place stands that the cruising range is not limited to the direct surroundings. In order to eliminate this striking disadvantage of electric vehicles the design is oriented totally to the use of optimised components such as batteries, drive system etc.

When it was being developed, the designers were counting upon the new type of nickel/metal-hydride battery. Presently it is equipped with LiFePO4 batteries and we are planning to equip it with new, even more advanced batteries. The advantage of these new batteries will be on the one side, that it functions without the environment-polluting heavy metals of conventional batteries and on the other side, it provides a much longer range with the same weight of the batteries.

The action range of the vehicle is also improved by the particularly light and aerodynamic design. Calculations proved that the supporting metal structure chassis developed for Stromboli II, need not weigh more than 34 kg to have sufficient stability, however, in end effect it still weighs only 50 kg. Thus, the entire vehicle together with the plastic bodywork, without batteries, weighs about half that of a small conventional passenger car. With one full charge the range of Stromboli II, at a cruising speed of 100 km/h, will be more then 1’000 km with more advanced batteries. The maximum speed is 130 km/h. The designer benefited from experience gained with Stromboli I. The range of this prototype is already considerably lager than that of comparable electric vehicles. Also, the batteries can take three to four times as many charging cycles, which makes Stromboli II more environmentally agreeable and maintenance is cheaper than with other electric vehicles.

An other essential aspect inherent with the design of Stromboli II is safety. To this end the results of crash tests have been taken into account. The point of gravity is very low because the batteries are stowed in drawers under the floor of the vehicle. Not only is the road holding quality optimised by which turning over in the event of an accident is prevented, also the passengers have an improved view through raised seats. The solid plastic-material parts of the bodywork are additionally reinforced by a shock absorbing girdle. The modelling which is dictated by its round forms is an asset towards safety.

At the same time, ecologically beneficial driving does not imply the forsaking of the usual driving comfort. On the one hand, this is realised by the quality of the interior furnishing. Much attention is given to the ergonomic design of the interior – steering wheel, seats, head rests etc. On the other hand, the vehicle is very easy to operate, for example, it requires no gears to be shifted. Despite small overall dimensions the interior space is of ample proportions to take up four seats and additional baggage.

Furthermore, electric vehicles require hardly any maintenance and are less susceptible to breakdowns because there is no complicated combustion engine.

Stromboli II is the proof that modern electric vehicles are superior to conventional cars not only in environmental respect.Stromboli II obtained approval for road worthiness and the most stringent test runs were absolved. So far, a number of companies and authorities have financially contributed in research and development. However, sponsors and partners willing to finance further development are welcome.